In the book, The Art of Possibility, Benjamin and Rosamund Stone Zander share a story of a young man that was attending one of Benjamin’s music courses. Zander, the conductor of the Boston Philharmonic Orchestra and a teach at the Walnut Hill Conservatory had come up with the technique of giving his students all A’s at the beginning of the year so that they would risk playing full out, making mistakes, and growing through the year in his course.

One young man was perplexed by this idea. In his country, the orchestra where he played he was number 68 out of 70. The student after being awarded the “A” by Zander wandered around pondering this idea for several days. He then wrote Zander that this was at first confusing that in his country he is 68 out of 70 but in Mr. Zander’s class he was an “A” student. He told Zander that he realized that he felt better when he thought of himself as an “A” student instead of “68” so he decided he would go with being an “A” student.

This young man learned in a very short  time what it takes most of us decades to learn that we get to decide what we believe, and that we can choose that which will benefit, and serve us the most. This young man recognized that he felt better when he thought and felt of himself as an “A” student.

What are you thinking about yourself? Are you giving yourself an “A”, or a making yourself number 68? Consider both options, which would serve you best then chose! Who can you give an “A” to today?
Hear the story from Zander himself. 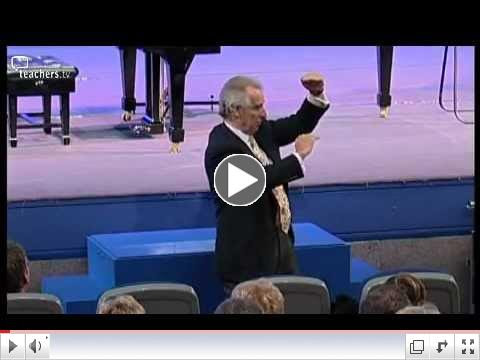