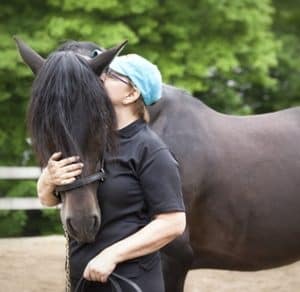 I own a beautiful bay Andalusian stallion who’s nicknamed Fin. Riding him today I was acutely aware of when he was listening to me, and we were communicating clearly versus when he was anticipating my request, and thus the lines of communication were marred. We could argue that he was in fact picking up cues based on his past experience with me, and thus my body language was communicating with him before I was actually aware that I was making the request. However, what in fact he was doing was remembering a previous session or pattern of exercises that we completed and was anticipating that we would do the same routine or dance today as well. So although he was correct about the previous pattern, he was incorrect about what I was asking today. So I checked the clarity of my cues, slowed down the rhythm of the process, and allowed him to return to listening by ignoring his anticipation, and staying clear on communicating my current goal.

“Wow,” I thought, “that’s it, we get use to a pattern of communicating with others, we respond to the previous communication patterns with them. We anticipate their words, agendas, or needs. Sometimes we get it right. but sometimes we really screw it up, because we have failed to truly listen, because we were too busy trying to anticipate the other person’s world.” Instead of just waiting, being curious, and wondering, we were being self-protective, defensive, people-pleasing, or afraid instead. Fin anticipated because he has a strong desire to please.

Why do you anticipate when communicating with others? Where do you fail to truly listen? Where could you slow down, listen, and truly have a conversation with someone today?